SUSVARA uses "Stealth Magnet" technology to provide an acoustically transparent sound without interference from reflections and diffractions. The nanometer-grade diaphragm is under a millionth of a meter thick and works well with the stealth magnets to ensures a remarkable tonal quality and clarity with a frequency response of 6 Hz to 75 kHz and an impedance of 60 Ohms.

The CNC-milled metal headband is hand-polished and accommodates a wide range of head sizes with an overall weight of 15.9 oz. The replaceable asymmetrical earpads conform around the human ear, comfortably distributing the weight evenly, but with a secure and sound grip. The supplied cable is made stronger with the improved materials of crystalline copper and crystalline silver wire, which provide a wide frequency range, low signal loss, and enhanced emphasis on the low-end for quality audio reproduction. SUSVARA comes with a detachable 1/4" cable and a detachable 4-pin XLR cable. Coming from the Arya I wasn't expecting too much of an improvement with the Susvara, but I was glad to be very wrong. The more relaxed top end was such a nice breath of fresh air that I didn't know I needed till I tried it. I thought I had heard every little detail of the songs I knew and loved, but every time I listen with the Susvara I hear something new and I love it. With such a balanced frequency response and amazing imaging, every instrument is able to be clearly picked out, and it makes dissecting complex music a joy. Extremely satisfied with my purchase, if you've got the money to throw around it's a "must try".

I resisted the Susvara for a long time, scared off by its reputation for being one of the most power hungry headphones around. I wanted something my old Bryston BHA-1 could drive well, so instead I tried a lot of other TOTLs and even owned an Audeze LCD-5 for a while. However, I was never completely happy with any of the other TOTLs. Each one exceeded at something impressive but none were great all-rounders. The Susvara is the first headphone I have ever heard that is close to perfect on every metric. It’s impeccably detailed, its tonality is gorgeous, its timbre natural as can be, and its imaging, soundstage depth and element layering without flaw. The Arya V2 slightly beats it on soundstage width but that is slightly exaggerated, and I’d argue that the Susvara’s soundstage is more accurate to the original mix.

When I was running the Susvara off my Bryston, it already sounded utterly beautiful but was a little thin in the low end. I could tell I wasn’t quite driving it to its full potential. Once I paired it with an Enleum (the successor the the much beloved Bakoon amp) the low end filled out and the Susvara suddenly became a slamfest. I was expecting an improvement in dynamics, but I didn’t expect the Susvara to scale as impressively as it does. It seems to have no limits as to what it can do when hooked up to a powerful chain. Between the headphone and them amp I’m out over $10k, but I have zero regrets. After five years on the market, the Susvara remains the headphone to beat.

Great headphone! Great detail, smooth sounding. Sounds great with a good system, I upgraded to the Ferrum Orr amp with Hypsos power supply, from a Burson 3xp which sounded good but not as detailed as Ferrum. Very comfortable too! Bloom Audio was great to work with!

I am definitely in love with these lil beauty's. They sound amazing and I am so thankful for Bloom Audio for giving me such a wonderful experience when it came time for me to purchase these wonderful sounding headphones. I am definitely going to shop with you guys again. Next purchase....Electrostatic headphone system....thanks again guys, G

The Susvara is the most neutral and natural sounding of all headphones I've owned and this is across 10 years of trying out different headphones.

I wouldn't even say the price is a con with this kind of sound signature.

The only thing that is a con with this headphone is a build that squeezes the most performance out of them. Most high end headphone amps won't give you the absolute best performance these can provide. Most people are achieving this currently with high grade speaker amps.

For example I'm on a D90SE and A90 and the sound is very detailed, but at the same time relaxed. That relaxed signature can be pushed more toward a punchy signature with a higher grade amp such as a stereo amp like the Benchmark AHB 2. It's very difficult to explain the Susvara's sound signature because in most headphones cases once they reach this level of detail it gets fatiguing however, it's the opposite for the Susvara it never feels fatiguing on my current build and it's the most detail oriented headphone I've owned thus far.

The sound stage is solid. While it's not as big as the V2 Arya I own it's *very* close. For the timbre and detail difference the Susvara has over the Arya though it is worth it.

Here's the bottom line It's the most balanced headphone you can buy and the only real one that can tick every single box. Again though, if you're looking for hard punch in the bass and the best dynamics you need a serious amp to draw that out of the Susvara. The Susvara isn't really limited as a headphone it's limit is your DAC and Amplifier, and potentially cables as electrical current means everything to this headphone and how it effects it's sound signature.

I also want to point out like the other reviewer here I purchased Moon Audio's Silver Dragon cable (for my Arya V2 originally I wasn't planning on the Susvara when I purchased it) but am I extremely glad I have it for the Susvara! The sound is even smoother on the Silver Dragon that it is the stock cable which sounds crazy given Silver normally causes headphones to be more sharp sounding.

A major thank you to Bloom for offering this at this price point and for their customer service. 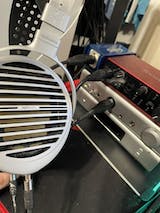