People's view on high-end audio has changed in the past few years. It seems a bit out-of-date just to sit in front of those heavy and complicated traditional audio systems in a fixed room. While what's going on outdoors is really amazing. Fashionistas are now enjoying the high-end and lossless music by taking along a top-tier portable player and a pair of decent headphones. QP2R, a well-designed and fine-crafted high-end portable player with excellent performance, is from Questyle.

The more complicated the world is, the more concise we are.

QP2R basically maintains the style of QP1R, the iF Industrial Design Award winner: the impressive design of tucked waist on the surface with a twin steering wheel, the helm style volume control inspired by a fine watch, and the patented design of hollowed-out protective crown against inadvertent volume change or accidental damage to headphone plugs. The perfect aluminum finishing, the unbroken lines flowing with a smooth-faced structure, and the curvilinear machined Gorilla Glass panels, all of which are telling that Questyle has strict requirements on manufacturing.

Meanwhile, Questyle sticks to their mission of taking audio performance and listening experience as their core values and achieving perfection in design and operation. In short, QP2R has preserved and inherited the typical and professional genes of Questyle which are becoming perfect over time.

As the "engine" of an audio system, Current Mode Amplifier, featuring a fully discrete and topological structure, achieves ultra-high sound performance close to recording scene that makes audience truly moved. Meanwhile, based on the Current Mode Amplification technology, users can get much better listening experience from QP2R than other devices when matching with their own headphones or speakers which even though may not be the original matched ones.

Current Mode Amplifier can achieve  excellent specs. For example, the THD+N can easily reach ultra-low level to 0.0002%—0.0005% which is tens or hundred of times lower than the ordinary professional devices, challenging the physical limits of audio testing and
bringing perfect listening experience.

Just like a car of two-wheel drive upgrades to four-wheel drive, four groups of Current Mode Amplifier circuits located on both front and back of the PCB bring stronger power.

With the high bias setting, just like a supercar is set to "RACE" mode, QP2R immediately attains stronger power and quicker responses, fully improving the mid and the low frequency sensitivity. There is a bias indicator on the side of QP2R and it tells the standard bias indicated by orange light, and the high bias by red light. It ensures that QP2R operates only in the state of pure Class A when driving different loads, especially heavy loads, and provides constant flow of strong power for the amplifier.

The Current Mode Amplification technology is first applied to Questyle’s flagship headphone amp, the Golden Reference System which is used in Xinghai Concert Hall (the biggest concert hall in China).

The 6063 Series Aircraft Aluminum is used for the chassis of QP2R and it has been invested over 100 minutes to be carefully machined by Fanuc CNC machine at Foxconn with the tolerence less than±0.02mm and the volume knob tolerence less than±0.005mm. The bead-blasted and anodised aluminium chassis makes QP2R attractive with a sense of exquisiteness and texture.

Just as a supercar stresses accurate shifting gears and a sense of ritual, or a SLR camera values rapid view of pictures among a huge number of files, most professional devices are mechanical and electronic control rather than touch screen operation. The accuracy of this mechanical and electronic operation has a special attraction, and QP2R makes it more appealing. You can truly feel it only when you put your fingers on.

QP2R uses a new patented technology of plane bearing on the mechanical steering wheel and the volume knob, which completely separates the electronic detecting and the sophisticated rotary bearings, thus the entire operation of the player becomes extremely accurate. In this part, there have been over 30 components used, over hundred structures and materials tested by Questyle's engineers and Foxconn' s R&D team, over 14 months spent in developing, and over 30 patented technologies applied. 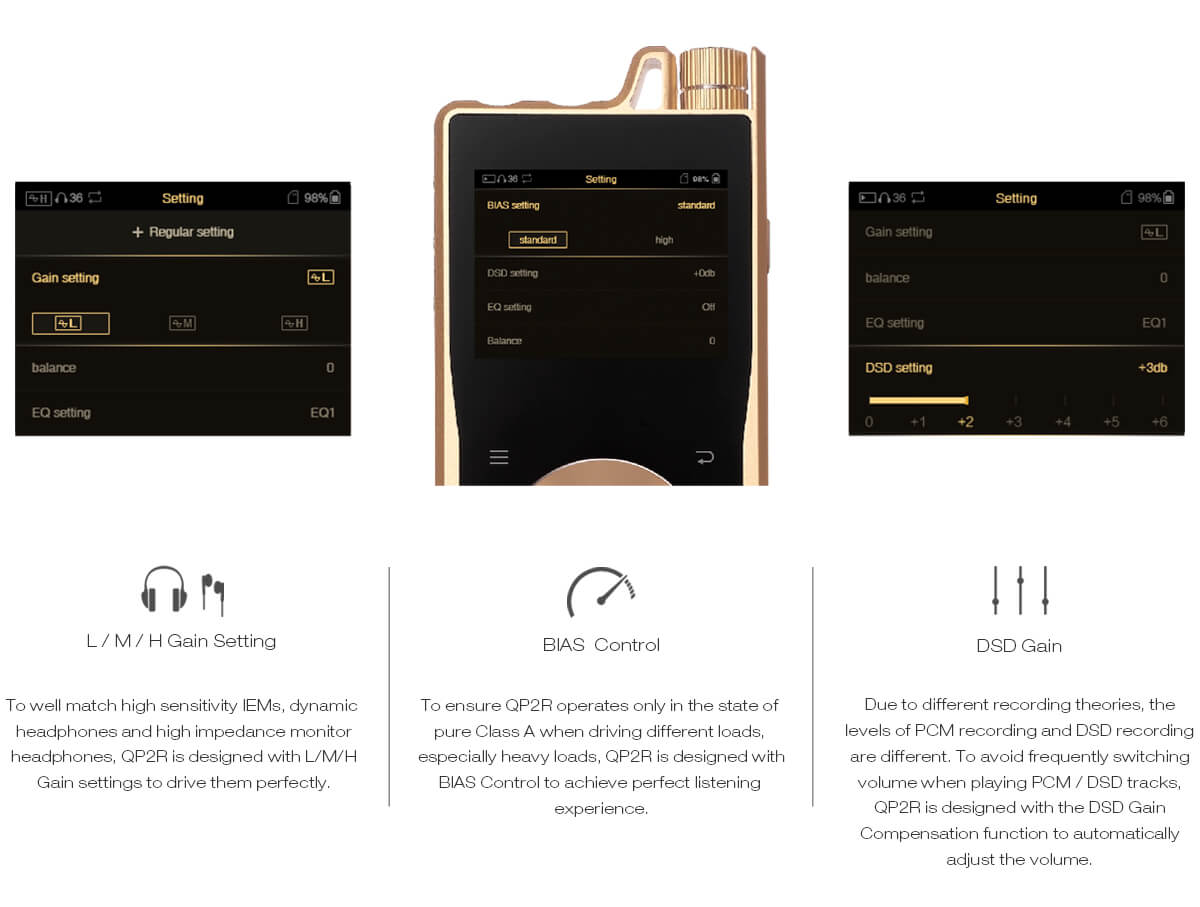